Things can only get better

After the awful start to this job, things could only improve and after a quick look outside of the window at 6.30 am I decided this was not the case and I was all set for another miserable Kent morning. It was pouring down, which meant soft, muddy ground which also meant everything became hard work. The show must go on and we have another job to go too, so it was time to crack on and face any other challenges that come our way head on.

On arrival at the site I was very pleased to a see a tree surgeon finishing up the tree removal so we could get cracking. We started clearing any remaining debris and digging out trenches for our hanging timbers. Everything started falling into place soon after, the digger/dumper arrived, then the skip and then 2 big lorries containing 35 tonnes of aggregates. Don’t forget we are taking these deliveries in between the school run and making sure it’s safe for the children in the playground. 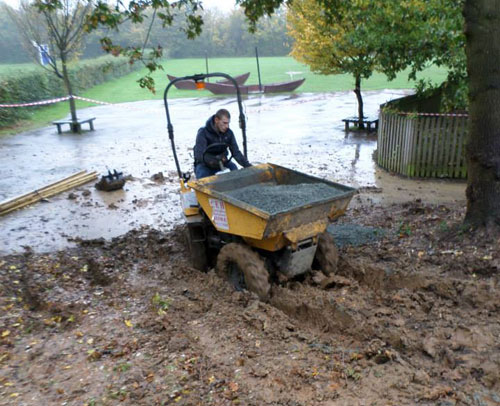 We decided it was a good idea to get the 20 tonnes of type 1 into place ASAP, as it would stop the site getting too muddy and so after arguing who was going to drive the dumper (like 5 year olds), we began moving a big pile from A to B and levelling it out. This was easier said than done with the amount of rain we had – but we managed it somehow!

We got moving on getting all our timbers in place and I had decided prior to arrival we were going to try something new. I don’t think any other artificial grass company has used this technique before, but I’m sure they will be once they see what we have done. We like to consider ourselves as market leaders in install techniques; we were the first company to use granite dust.

After digging a trench we have concreted in parallel timbers with a 25mm gap in a big arch around the top of the slope. These are encased in concrete and this will enable us to run grass into it from one side and then another piece out from it, thus reducing the roll size being moved around and more importantly, making installing on the slope much easier. 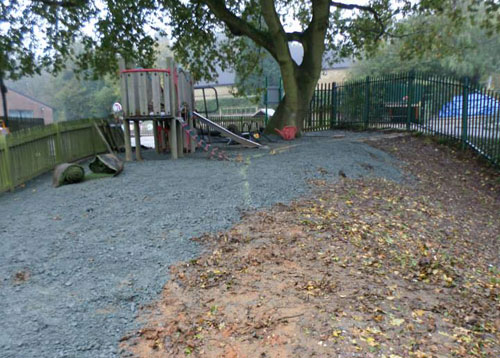 We will be boxing in around the climbing frame also making this easier to install the end product, but also so we can lay 25mm depth shock pads in case anyone takes a tumble. Then this will be grassed over.

After 3 good days graft we were back on track. All the timbers were in and set solid ready for the grass. The 20 tonnes of type 1 was in, raked and compacted. We had taken delivery of another 7 tonnes of 10mm granite chippings and also moved this, raked it and compacted it. The job really was starting to take shape, look out for part 4 later this week to check on our progress on this school artificial grass project!

Gavin is the founder of Perfect Grass Ltd. He has more than 17 years artificial grass experience. In his spare time he likes football (season ticket holder at West Ham United) going to the gym and sleeping. You can follow Gavin on Facebook

This site uses Akismet to reduce spam. Learn how your comment data is processed.

We occasionally link to goods offered by vendors to help the reader find relevant products. We may earn commission from links on this page but we only recommend products we would use.